I must say I appreciate the wide variety of Code Club World’s Scratch projects that are out there. Last week both of my 4th grader Code Club students worked on Ghostbusters (and just before Halloween, too). The Ghostbusters project allowed me to talk about the Stage’s coordinate grid and introduce the Pick random block.  Two important concepts in Scratch programming and making interesting games. 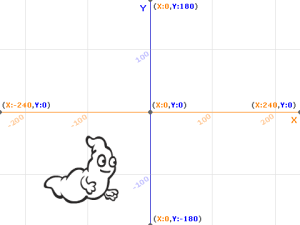 It is also a fun game to code.  This version is an improvement over last year’s Ghostbusters project that we did. I compared the two and they are different.  The algorithm for appearing in random spots on the grid was simple to understand and easy to code, so the students saw results sooner.  That left more time to customize. Customizing is what these coders do best.

This ghoul is very hard to catch but does it actually go back in time?

The game also implements scoring and timers. Students were able to customize these as well, adding additional Sprites and varying the amount of time they show on the screen and the number of points you get when you click on them.

One student wanted to increase the speed of the timer when certain sprites were clicked.  That required a different way implementing the timer.  I knew it could be done that way but I couldn’t think of how on the spot.  Now I easily come up with the algorithm- set up a speed variable, change the speed when Sprites were clicked, decrease the time by speed amount. 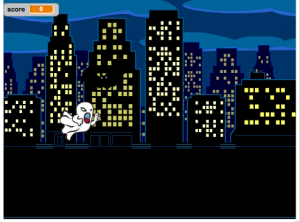 The background makes the black bat very tricky to click on.

The speed at which these students pick up the ideas from these projects and incorporate their own ideas and creativity amazes me.  In going over their projects for this blog, I realize I didn’t see all the coding that was going on at the time.  I’m impressed. 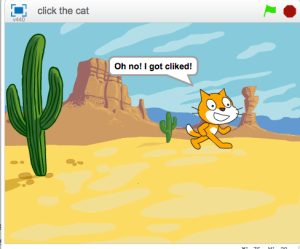 The only sour note was some behavior issues that came up.  That’s disappointing.  It’s okay to have fun but not at the expense of other people’s learning.  Those kind of disruptions are not okay.

There’s no Code Club this week or next due to school schedules and holidays. I heard a lot of “I wish we had Code Club today” and even a “I wish Code Club was everyday!”